bitcoinflood in LeoFinance • 18 days ago It's no surprise that there are glaring issues with the HBD actully being stable. Whenever markets start to wildly swing this thing ranges from $1.10+ to $0.93- It's gotten a little better but even a $0.01 change that holds more than a few seconds I consider not stable.

Here's HBD over the last 24 hours. That red line is where the price should be pegged at all times. 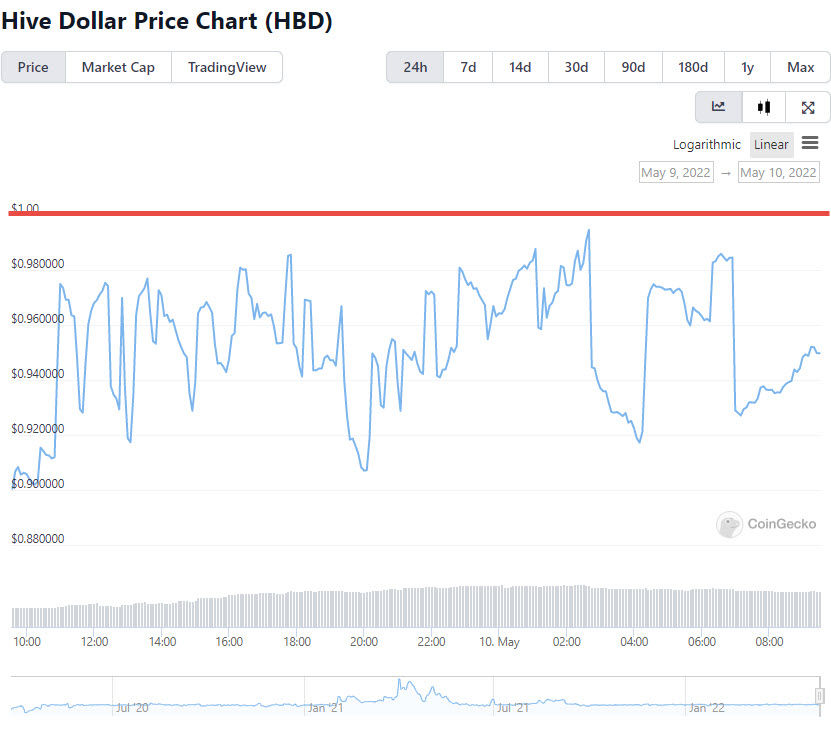 Over the last 90 days... Again red line is where it should be pegged. Now let's take a look at PHBD it's better but it's not there just yet.

Over the last 24 hours... The green line is the pegged price it should always be at. 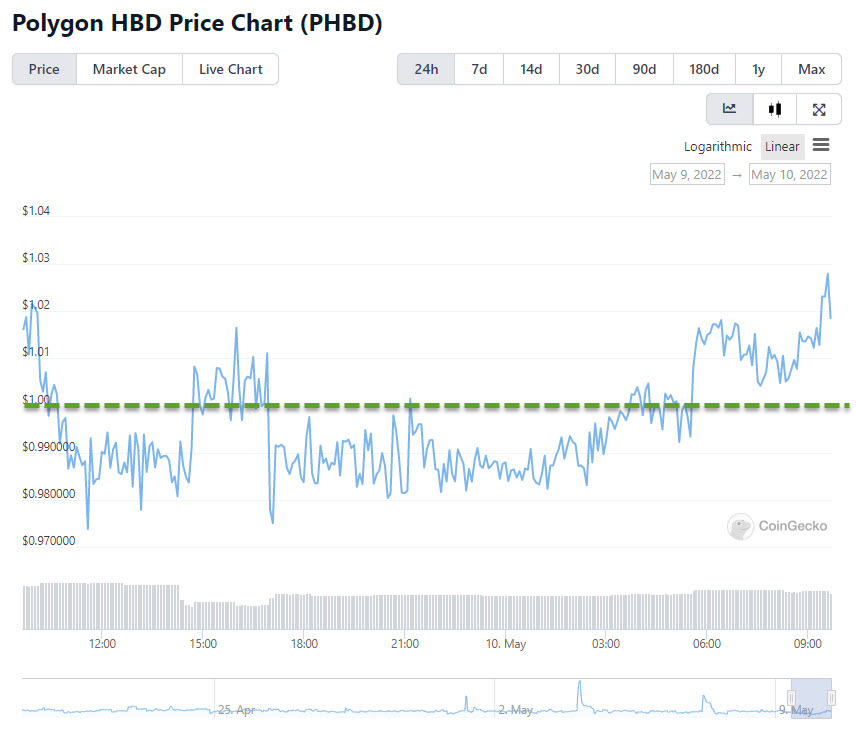 It's held pretty well. I would say better than that of HBD as the price swing seems to be around 2% in most cases and 3% in the most extreme in the last 24 hours compared to HBD itself which has ranged from 6%-8%

I think it's fair to compare this to other stable coins over the rocky and wild last 24 hours and see how they did.

I think it's fair to say that HBD isn't broken much like we just saw happen with UST but it still for sure has room to do better. Many put this on a liquidity issue but I think it stems outside of that. Sure more liqudity will help price flucuations from large bulk orders but that shouldn't be the tell all solution for HBD.

pHBD which is the wrapped version of HBD on the Polygon blockchain used on PolyCub proved to be one of the most stable but only pushed 17,000 in volume when compared to HBD of 219,000 in volume over the last 24 hours. It begs the question if pHBD saw a large high amount of volume would it be able to hold the pegged price?

I feel stablecoins are a interesting addition to the crypto world but I also feel they bring a good amount of very real security issues in terms of price value. If the stable is not fully backed by the FIAT standard does it really truly hold the price?

We can see that stables didn't fair all that well over the last 24 hours and while that might seem like a large amount of sell off happened it actully wasn't. The entire market cap only fell about 15% in a single day. It's been falling for the last month. A correction before the rally? Or something more?

Personally I feel it's been nothing more then a panic sell off of what if. For some reason people feel it's the end of the world and so be it if they want to think that. During these sells offs it's when I BUY and BUY I did! As prices being to go stable again and rally that will be my point to get into stables again at least partial and HBD more over pHBD so far feels like a very solid move for the next wild cycle.

What are you thoughts on stablecoins and what just played out over the last 24 hours?

I bought LUNA a couple of hours ago. Just for the sake of trade in case UST rebounds... Hope I'm lucky:)

It's like playing HBD but to the extreme! I mean it's suppose to be $1 so I would bet on them fixing it asap and not letting it just go to garbage. From what I remember though it's heavily backed by Bitcoin? that's not very stable...

The opportunity for HBD to rise as one of the most valuable Decentralized Stablecoins out there is massive.

I have been buying a lot of HBD and HIVE ever since the change to 20% on-chain fixed savings rate.

With what just happened to UST, the market opportunity for HBD just skyrocketed.

In my opinion - and this comes from talking to a lot of DeFi whales who want a reliable 20% return on a stablecoin - the last piece of the puzzle is onramp and offramp liquidity.

pHBD is how they get that. We need to continually market the need for pHBD-USDC liquidity to the broader Hive ecosystem. It's never been more important than now to get liquidity into pHBD-USDC so we can keep onramping these whales and also make them feel comfortable knowing that an offramp with deep liquidity is always available.

Thanks. This reminds me I was planning to do a deep dive on HBD this week to really understand how it works.

The mechanism for stability is a little fuzzy for me.

Now after the last 24 hours, it seems especially pertinent to know ;-)

Hopefully with @hivelist’s upcoming Polygon NFT marketplace that will focus on pHBD, we can bring more ecommerce exposure to the marketplace.

They say stablecoins aren’t sexy, well the more I am in the crypto game, the more sexy they become everyday, lol. Just gotta put on those bear market goggles, lol.

That would be super cool I'd love to see pHBD added in there!

Submit
0.00 HUSTLER
Reply
[-]
poshtoken  18 days ago
The rewards earned on this comment will go directly to the person sharing the post on Twitter as long as they are registered with @poshtoken. Sign up at https://hiveposh.com.
100%
-100%

Yay! 🤗
Your content has been boosted with Ecency Points, by @bitcoinflood.
Use Ecency daily to boost your growth on platform!