The future of social media - Blockchain and Web3 dApps on Hive

forexbrokr in LeoFinance • 9 days ago 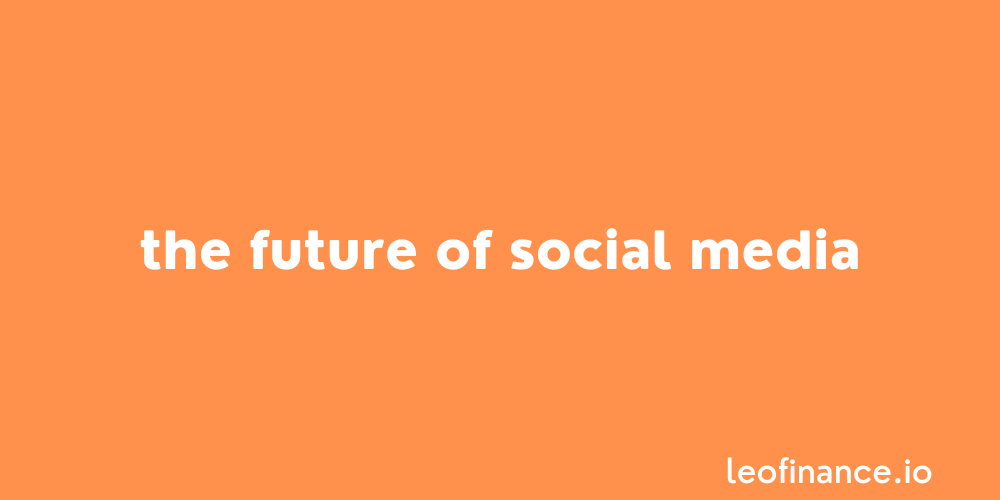 A look at why social media needs an immutable blockchain forming its base layer and why Hive’s blockchain is best equipped to form the foundation of Web3 social media.

The other day on the blog, I encouraged anyone switching from Twitter to Mastodon, to try Hive instead.

So I go to bed thinking nothing of it and then wake up to find Hive trending on tech blogs, Threads and heck, even Twitter itself.

Of course it’s not our immutable Hive blockchain and plethora of Web3 social dApps built on top that is trending.

But instead, it’s some shitty copy/paste Web2 Twitter clone being run by two college kids out of their fucking garage, that just happens to share the same lazy branding.

Anyway, at least it gives me another opportunity to expand on the key elements of social media in the future.

Let’s start by taking a look at what this means, why the future of social media needs an immutable blockchain forming its base layer and why Hive’s particular blockchain is best equipped to form that foundation of Web3 social media. The key elements of social media in the future

Social media MUST ensure users are afforded the following:

Right now as a regular guy or gal sitting in your cushy lounge room, you might not think that either are particularly important to you.

You just want cat videos and to chat to your friends.

But if you don’t live in a western democracy where your ability to communicate and transact with the outside world is limited, you will understand how game changing these two things actually are.

…and just how fragile that ability is too.

No you’re right though, I’m sure it won’t happen to you and you have nothing to worry about, carry on.

But let’s say that you are a business or influencer who is financially incentivised to mitigate your risk of not being able to put your message/offer in front of your audience.

Just ask how it turned out for any business, content creator or influencer that has been banned from Web2 social media how it is working out for them.

Surely if you could mitigate this risk as a business, it would be a no brainer to do so.

And this is why in my opinion, it will be businesses leading the transition from Web2 to Web3 social media and that the dominoes of regular folk will fall from there.

But anyway, that sort of future game theory is for another day.

The only way to achieve true account ownership and censorship-resistance is to to build future social media platforms as Web3 dApps on an immutable blockchain.

If you’ve only ever used Twitter, understanding the concept of Web3 social media and its advantages are going to take some outside of the box thinking.

For example, Twitter Inc is in control of everything.

In control of you and your ability to get your message out.

As such, you not only run the risk of having your particular account banned, censored or deleted…

But as we’ve seen this week from Elon’s threats, the risk of having the entire network nuked - accounts, data, platform, all of it - is real.

On Web2, you don’t really own anything and are at the complete mercy of that company’s particular whims of the time.

This is where an immutable blockchain at the base layer of social media in the future fixes everything.

By using an immutable blockchain to house your account and host a series of dApps acting as front-ends, you not only have full ownership over your account, but gain censorship-resistance for your content.

The websites you use to post and read content become nothing more than interchangeable, throw away front-ends because your data including posts and followers is all stored on the blockchain.

The Hive blockchain, born from the ashes of Steem.

Featuring no pre-mine, no CEO and the type of token distribution that ensures not only fair governance, but also network security, Hive is the obvious blockchain of choice to form the backbone of social media’s future.

This is an important distinction that needs to be made when comparing a social dApp built on Hive, with say Twitter or the Web2 Hive Social platform that is receiving the current media attention.

Technical censorship-resistance is where it is literally impossible for a third party to ever stop you from getting your message to your followers.

A concept that is completely different to say Elon Musk promising that he won’t censor you.

Spoiler alert: He will when a government or law enforcement agency knocks on his door and kindly asks him to comply or go to jail.

Unlike Twitter or any other Web2 social media platform, there is no CEO of the Hive blockchain’s door to be knocked on.

Whenever one goes down, another will be financially incentivised to step in and fill the void.

Moving forward, the whole point of Web3 social media is that you can use a single account to access multiple front-ends, each displaying the data on your account in its own unique format.

Any dApp connected to the Hive blockchain allows Hive account holders to simply plug in and use their social media platform.

It is completely up to those front-ends to display content on the blockchain how they see fit.

But again, remember it's on the underlying, decentralised Hive blockchain where your data is immutably stored.

If these standards don’t align with your own, you are always free to simply connect your account to another front-end.

Or even build and host your own!

So even if they choose not to display your content, you CANNOT be censored.

Final thoughts on the future of social media

When you ignore the hype and start to think about the future of social media in a logical manner, you will soon realise that all roads really do lead to Hive.

It’s clear that the future of social media needs an immutable blockchain forming its base layer and Hive’s particular blockchain is best equipped to form that foundation.

PS. The best way to get a Hive account is by clicking the big get started button at the top right hand corner of this page and using your Twitter handle to sign up.

You’re then able to take full ownership of your account’s keys (when you’re ready of course) and gain all of the advantages that a Web3 Hive account account has to offer.

I wouldn't mind if decentralized was the ultimate winner but I think it's tough. The Web2 apps will continue to have people stay there so long as there is a good chance of them getting an income and they will complain when they get banned. Obviously, they will go back there if they are unbanned and the cycle repeats. I think Hive is better because you still have your account. However, people can somewhat get censored from a particular front end (tribes/front-ends can mute).

I think that in the future, tribes/front-ends aren't going to mean anything.

We need to stop thinking about tribes as communities and instead purely focus on our own followers.

Wait until someone builds an out of the box solution to self host your Hive account on its own domain, displaying content how you want it.

What I see that Hive currently needs is marketing or more dApps for the whole world to see the advantage of being decentralized. 😊

Learn more about our delegation service to earn daily rewards. Join the Cartel on Discord.

Submit
0.00 HUSTLER
Reply
[-]
poshtoken  7 days ago (edited)
The rewards earned on this comment will go directly to the people( @rzc24-nftbbg, @successforall ) sharing the post on Twitter as long as they are registered with @poshtoken. Sign up at https://hiveposh.com.
100%
-100%

No you’re right though, I’m sure it won’t happen to you and you have nothing to worry about, carry on.

If there is one lesson we can learn from life since March 2020, it's this: Yes, it can happen to us.

After all, how many of us expected to be banned from Big Tech platforms simply for asking questions about things we were going to accept anyway? Then things were kicked into higher gear with the Canadian Trucker protests about a year ago.

Yes, it can happen to us.