forexbrokr in LeoFinance • 2 months ago 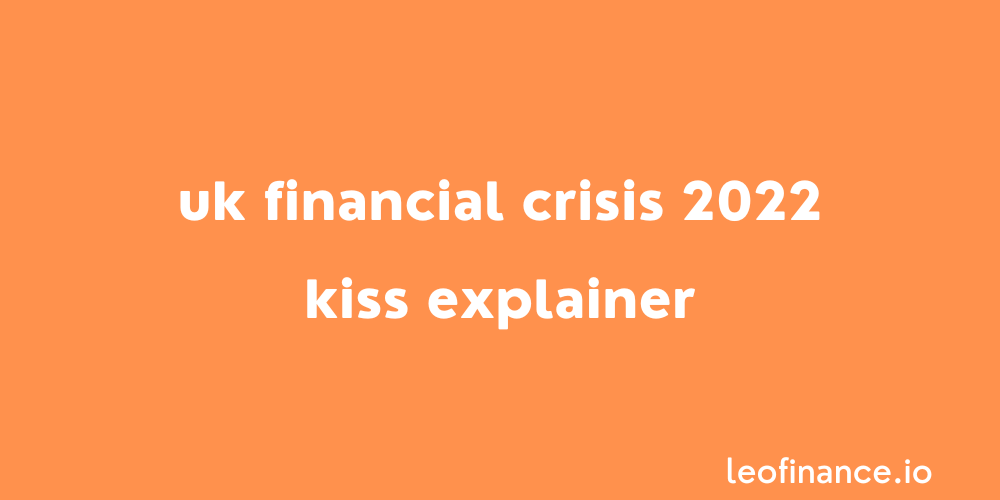 An easy to understand explainer on the 2022 UK financial crisis.

With the UK government’s announcement of sweeping tax cuts to the top rate of earners, ripple effects were sent through the entire UK economy and beyond.

Bond yields ripped higher, the pound sterling plummeted and to starve off a full scale financial crisis, the Bank of England (BoE) was ultimately forced to intervene by buying long dated bonds known in the UK as gilts.

This intervention allowed key markets to continue functioning and bought the government time to reverse the planned tax cuts, which they subsequently did.

But a ripple effect in the economy has started and like a tsunami, may not be able to be stopped by building a wall of central bank money.

With the BoE's gilt buying program scheduled to end on October 14, the risk of a full scale financial crisis remains ever present.

Read on for our KISS explainer with all of the key questions answered.

As always, I encourage you to jump into the comments section and ask questions if you don’t understand something or want to add your 2 pence! What did the UK government do to cause the crisis?

On September 23, the UK government released a mini-budget that featured plans to slash taxes for the rich.

The idea behind the plan was that these are those most incentivised to innovate and therefore generate jobs and growth.

But when markets saw that they intended to pay for these cuts by borrowing money and sent bond yields flying as a result.

If we lived in a vacuum, this stock standard centre-right policy of cutting taxes at the top, would not have been an issue.

But we don’t live in a vacuum, do we…

We live in a current global economic climate that features crippling levels of inflation that even their own central bank can't control.

Talk about incompetent and tone deaf from a government that had been in the job barely 3 weeks.

As such, the results were absolutely disastrous.

Why did this cause bond yields to rise?

When you say that you’re cutting taxes, the shortfall in revenue needs to be made up elsewhere.

When markets saw that the government intended to bridge this gap by borrowing money, the prices of government bonds fell (because nobody wants to be holding shitty debt)...

Just to highlight how out of step fiscal policy was with monetary policy, the BoE is still selling £40bn of bonds this year as it continues to wind down its quantitative easing programme left over from the GFC.

It cannot be stressed how much of a communications clusterfuck from the government that this whole ordeal has become.

Fun Fact: UK bonds are called gilts because the original certificates issued by the British government had gilded edges.

Why did this cause the GBP to fall?

With inflation pressure looming large over GBP, borrowing money that you’re likely never going to be able to pay back was not viewed kindly by the market.

Add the fact that state spending to keep the economy ticking over through covid, financing Ukraine’s war with Russia and all of the lingering Brexit unknowns, you can see how this was somewhat the straw that broke the GBP camel’s back.

But while regular people immediately felt the fact that the currency they were earning was losing its global purchasing power, it’s the rising bond yields that are causing the foundations of the entire UK financial system to crack.

Why did a rise in bond yields (an increase in borrowing costs) in the UK matter?

We already went over why bond yields rose above, but it’s the events this rise triggered that started the crisis.

All focused around the massive, state enforced retirement savings plan that all employers must place a percentage of their worker’s wages into that they call pension schemes.

As bond yields ripped, this exposed margin positions in some of the biggest pension funds to rising funding costs.

Most notably, margin costs in obscure financial instruments called Liability Driven Investments (LDIs), that had never been tested in an environment of quickly rising yields that they were now in.

LDIs were designed to match long-term liabilities in pension funds with assets.

What was meant to be a simple hedge, was now triggering margin calls left right and centre across the entire UK pension fund industry!

As they received margin calls, pension funds were forced to free up cash and the very safe, attractive nature of government bonds made them the first to go.

But the bond market is only so deep and if EVERYONE is being forced to sell, then who in their right mind is going to step in and buy?

Without buyers, the entire bond market can quickly seize up and when that happens, a financial crisis becomes real.

Why and how did the Bank of England (BoE) intervene?

With bond markets seizing up, the Bank of England (BoE) had no choice but to intervene.

In doing so, this meant buying the bonds that the pension funds NEEDED to dump in order to finance the higher costs of their margin positions.

But with the BoE literally in the midst of unwinding previous bond buying programs that they used to stimulate the economy post GFC, the government’s incompetence in forcing them to immediately buy again, can not be exaggerated enough.

Has the risk of a 2022 UK financial crisis now been removed?

No, the UK is still at risk of a full scale financial crisis.

The reality of the BoE’s intervention to buy bonds is that it's nothing more than a temporary solution to a systematic problem.

Something akin to placing a band aid on an axe wound.

Even with the government scaling back their planned tax cuts, it’s not as if the UK’s economic woes have dissipated.

Borrowing costs aren’t going to magically come down and as the pension funds have shown, the system is STILL leveraged to the hilt in a completely unsustainably manner.

“LDIs had never been tested in an environment of quickly rising yields”, they said.

They knew this could happen and were happy to put the entire system at risk to keep the ponzi going.

The entire financial system is rotten to the core.

Even funnier is the fact that the BoE now finds itself in a position where it's simultaneously being forced to buy all of the shit that pension funds are dumping, while also pretending that they have inflation under control by hiking rates.

Something that they can get away with for another week.

But then that’s it.

They will be forced to pick between stimulating (read: saving from margin inflicted meltdown) the economy and halting the breaks.

The BOE’s intervention has calmed the market for now, but the next key date to keep an on is now October 14.

This is when their scheduled gilt buying program comes to an end.

What happens then, we honestly have no idea.

And as I’m sure you have gathered by now, markets don’t exactly thrive in periods of uncertainty...

I would really like to believe that they are stupid and incompetent... As a matter of fact, faces that we are seeing on the TV probably are...
But, on the other side, I can't believe that these puppets are moving the strings and I would rather say that someone is deliberately killing currencies (and economies) all over the world... Yes, it's GBP at the moment, but we already say YEN, EUR, and others going down... The Great Reset is coming...

I have picked this post on behalf of the @OurPick project which will be highlighted in the next post!

Who do you see as the puppets moving the strings?

Who benefits from this?

It's hard to believe that a man like Joe Biden really governs over the wealthiest country in the world... I would rather say that others are pulling strings... Organizations that are working in the "background", like https://www.weforum.org/about/leadership-and-governance

Throughout history, we can see the same pattern over and over again, create a war, big economic crisis, and distraction, and you can easier RULE over the people...

Its a shame what is happening with the world oldest and still working curency. 300 years tradition just to be ruined from few incomentent politicians.

Yep, it's a bit of a worry if (as a Brit) most of your assets are denominated in GBP. I'm slowly fixing that, makes tax a real pain in the neck though.

If things get worse as expected...

...the ironic thing is that our global system is so interconnected, that GBP and GBP denominated assets certainly won't be the worst place you could have your money!

To be fair, those politicians were just the unlucky ones to place the straw that broke the camel's back.

The real issue is our entire financial system is rotten to the core.

It sounds like a huge mess and it really doesn't work out when you have to borrow to make up for the missing revenue. So in a way, it's going to affect a lot of things because they think people would not realize what they are doing.

Haha, well turns out they noticed!