The Play2Earn Report - May The FORTH Be With You!

khazrakh in LeoFinance • 23 days ago

Oh boy, what a week this has been! I've been taking care of a friend's dog for the whole week. As she needed a lot of attention, I didn't get too much done in the crypto world and up until Thursday morning, I fully expected to have a rather short Play2Earn report without too much to report. But then, the Ampleforth airdrop came and single handedly turned this week into one of my best weeks ever since I got involved with crypto. I never cared for Ampleforth and only have some odd tokens in my wallet because it was used as a tipping coin at Publish0x. I would have converted it to something useful long ago, but thanks to the fees, that never happened. The 97 FORTH I got from the airdrop were worth almost 5,000$ when I claimed them and not too surprisingly, that was the biggest airdrop I've ever claimed by far. It's events like that that really make me believe that being able to live from crypto alone could be a lot closer than many of us might believe.

So with that in mind, let's take a look at last week's token gains:

Now that's what I'd call some solid growth! As you can see from my CUB numbers, that's where the money I've made from the Ampleforth airdrop went. By doing so, I've more than doubled my stake in CUB and right now, they are all sitting in the CUB den, earning me a nice daily dividend. At current numbers, I'm making about 900$ per month with this stake and that's with CUB below 3$. Obviously, CUB could go nowhere and the numbers could decline more and more as time goes by. Nevertheless, it could also go the other way and eventually take off. If that ever happens, I'm basically covered. CUB is my biggest bet so far, but considering I only have "free money" in there, I feel really good about taking it.

I've also powered up quite some CTP this week. I'm taking part in the third CTP Power Up Challenge run bei @ctpsb which is going to last until May 4th. For that time frame, I'm going to convert parts of my daily earnings in the Hive ecosystem to CTP and power it up. I have no exact goal set, but I want to end up somewhere north of 20,000 CTP and I'm quite confident that I'll be able to pull that off.

Next, let's take a look at my different projects:

Because of the dog situation I didn't have as much time for Splinterlands as I'm used to. I managed to finish my quest each day nevertheless and also played some tournaments and all of my guild's brawls. I've been competing in Untamed only Novice several times in a row and have been doing pretty good so far. Out of my last three frays I've only lost two of my games with one of them coming down to a coin flip that I lost.

I'm also still earning daily income from my referrals and while there haven't been any major purchases this week, I've still made more than 20,000 credits that way. I'm still in the process of maxing out the missing pieces of my Untamed collection and once more managed to max out some great cards this week. 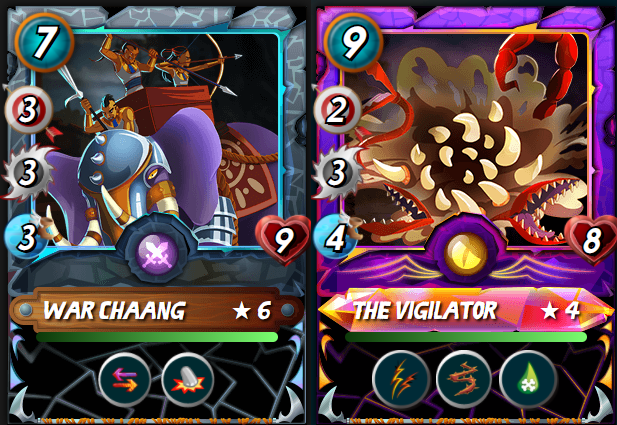 Both War Chaang and The Vigilator are pretty situational cards that don't make too much sense in every battle. They are super strong in certain rulesets though and with my core decks more or less complete, it felt like it was a great time to add some of these killer cards for the right rule sets to my collection. Both are obviously extremely strong in Melee Only, which has been one of my weakest rulesets so far. As with all new cards, I still need to figure out when to best use them, but I feel like they should be of great help eventually.

The first part of the April releases went live just as planned. The Colonization pass along with squadrons, alliances, and a lot more is now accessible in the game. On top of that, there was a big update for the uniform feature as well and I have to say, that feature is really well thought out and just looks great. Here's a snapshot of where what part of your achievements will be displayed: Collecting all these badges and medals will likely take quite some time but it promises to be a lot of fun. Nevertheless, this was the last addition to the game before the launch of colonization. To quote the game's developer: "No line of code is written now that is not something about playing colonization." It's not looking too good for a release in April as there's only a week left, but I guess we'll all be busy playing Colonization in May!

I've set another goal for myself in terms of blogging. Every day I'm at home I'm going to write an article! This is something I've been not too good at in recent months. I usually managed an article every day for a while but then had 2 or 3 days in a row without an article. There will be exceptions to that rule, but I want them to be as few as possible. So far, everything went as I hoped, even with the dog around. I've released an article every day and I've also had several articles with quite high votes.

The key to making this possible was my decision to move away from strictly publishing crypto content only. For a while, I felt like I always had to publish content related to crypto in order to be able to use the leo tag. The truth is, I'm pretty involved with crypto (gaming) but it's not the only thing going on in my live. Some days, I just don't feel like writing about anything blockchain related. In the past, this meant that I just wouldn't publish an article. Instead, I'm now writing about what ever I feel like at that day. For now, that's mostly gaming and TV shows, but for the future I have some more topics planned that I want to cover eventually. Admittedly, I'm enjoying myself a lot more since I made the change and fun enough, some of my non blockchain gaming articles still made it to Popular on Publish0x, something I really didn't expect to be even possible.

Rising Star has made an extremely strong comeback ever since the introduction of STARPRO. Within the last two weeks, we've managed to almost get back to where we were 2 month ago. It seems like the additional Starbit sinks are working out quite nicely.

STARPRO itself hasn't been traded all that much so far, so the price is still super volatile in that area. It's probably going to take some weeks for things to settle in before it's safe to say anything about the expected value of that token. In other news, Rising Star is now also accepction the LEN token from @liotes, giving both projects additional utility.

And that's all from me for the week. As you can see, other than the big news from Ampleforth, not too much has been going on this week. I'll return the dog today, so starting tomorrow I should have a lot more time for my crypto hustle again. Anyway, thank you all for reading and see you next time!

Wow those referral fees really seem to add up for you and your earnings are definitely amazing.

I think Warchang tends to be a little more versatile and great in sneak rule sets (lower mana cost is better). Vigilator tends to be a great card if it can live long enough in the right rulesets.

I have to admit I still struggle a bit with using Vigilator in the right spot and battles - so far I've been loosing more than winning with him but I'll get there ;-)

I find that high mana opportunity, sneak and melee can attack anywhere is great for vigilator.

An excellent result of metanalysis, from a person who knows how to observe himself. Wise observation.

I found an interesting idea for myself to keep weekly reports on the accumulation of assets. Yet the world of cryptocurrencies is very active to keep such statistics only once a month. Thank you.

Link to vote for @cranium as a witness

Congratulations on your big airdrop! I think that was money well spent. I probably would have spent a good chunk of it on NFTs all over the place. By the way...Have you joined a squadron/alliance?

Not yet, was quite busy these last days. You don't happen to have already founded one and are looking for a member ;-)?

I should! I was going to but I couldn't think of a name. I want it to be a GREAT name.

Nice CTP progress :-). This will come in handy for the challenge !

Hi @khazrakh, you were just shared some LUV thanks to @cranium.leo. Having at least 5 LUV in your wallet enables you to give up to 3 LUV per day, for free. See the LUV tokens in your wallet at https://hive-engine.com or learn about LUV at https://peakd.com/@luvshares