leofinance in LeoFinance • 21 days ago 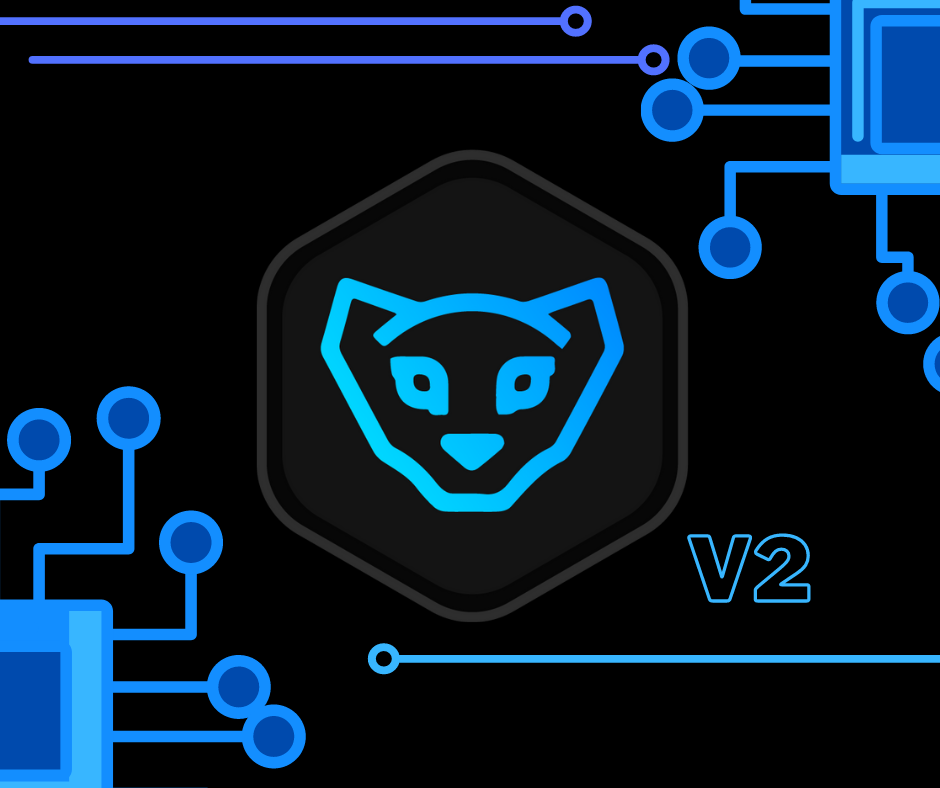 As promised in so many of our weekly AMA chats, CubFinance V2 is officially rolling out. CUB V2 includes a lot of the features you see on PolyCUB.

At the core of V2 - for both POLYCUB and CUB - is the Multi-Token Bridge. The bridge allows us to deploy wrapped derivitive assets to Polygon and now to BNB Smart Chain as well.

The rollout of CubFinance V2 is lined up in 3 phases.

Phase 1 is the release of the Multi-Token Bridge and 3 new vaults:

As of right now, you can wrap assets and LP on https://cubdefi.com/farms. We're officially hard! We actually rolled out CUB V2 Phase 1 on Monday (~4 days ago). ICYMI (and you probably didn't) the HBD price mooned and this led to a massive exodus of Hive Users' liquid HIVE and HBD. This event of course doesn't coincide all that well with trying to get Hive users to wrap HIVE and HBD to BSC and provide liquidity.

So we soft-launched and stayed the course since we had all of the updates already in the queue to be rolled out on Monday.

Phase 2 and Beyond | Burning Disproportionate Amounts of CUB

Right now our focus is to get as many assets bridged to BSC as possible. The more assets that get bridged (HIVE and HBD) and providing liquidity in the 3 farm vaults, the higher the amount of CUB that will be burned on a monthly basis.

The MTB generates insane revenue through:

All of this revenue buys CUB and burns it each month.

In phase 2, the rollout of the CUB Governance UI, CUB DAO Contract, etc. will take place.

Phase 3 will feature the rollout of the CUB Variable Staking Contract. Which will look similar to vexPOLYCUB but allow users to define the time they lock their CUB. 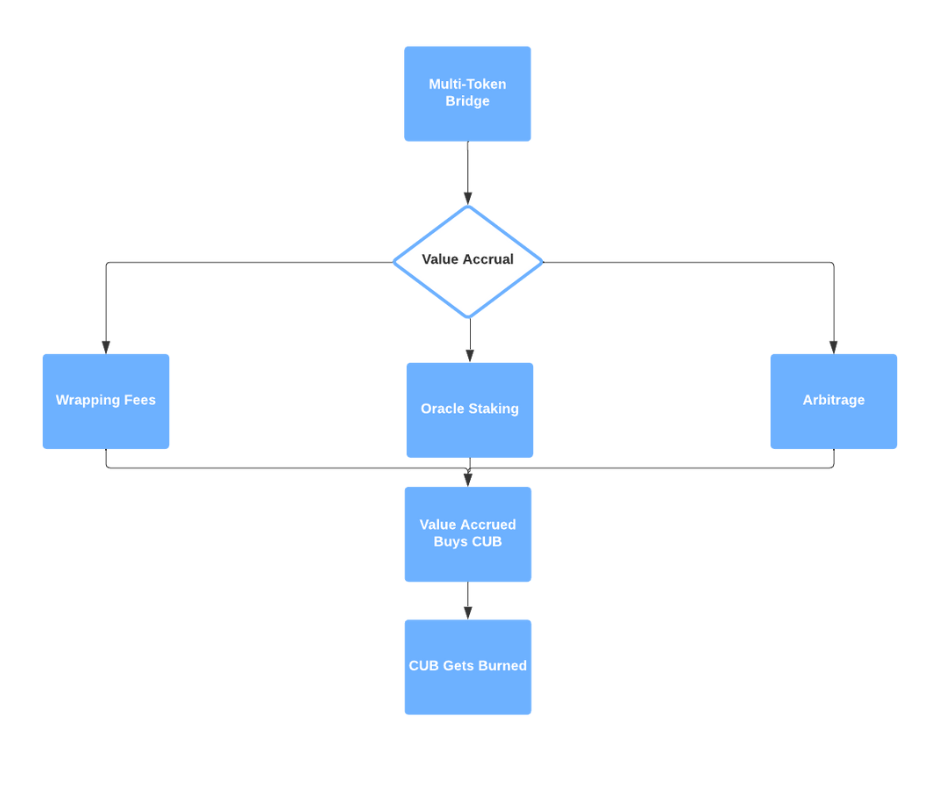 These 3 mechanisms already generate thousands of dollars per month for POLYCUB. Now they're live and in action on CUB.

As more assets get wrapped and provide liquidity on CubFinance, the amount of value accrued increases.

As that value accrual increases, more CUB gets burned each month.

At the current CUB prices, we're anticipating a disproportionate amount of CUB to get burned in the first 30-60 days of CUB V2. Potentially as high as 500k CUB if the price remains around $0.03.

This means that 1-2 months of the MTB being live could burn more CUB than we've burned since the beginning of CUB almost 18 months ago!

The future is exciting when you start diving into the potential of this MTB Revenue setup. It's just starting to take place on PolyCUB and CUB is now slowly accruing value and getting ready to buy/burn through the DAO contract! There is a brand new LeoBridge UI to coincide with the POLYCUB DAO and CUB DAO releasing pHIVE, bHIVE and pHBD, bHBD.

The UI makes it easy to find what blockchain and what asset you're wrapping/unwrapping.

How to Provide Liquidity to bHIVE, bHBD

Here's a quick and simple guide to providing bHIVE, bHBD liquidity. The Community has already written some great guides so check the links below if you want a more in-depth one.

1). Wrap HIVE or HBD to BSC by visiting https://wleo.io and selecting bHIVE or bHBD 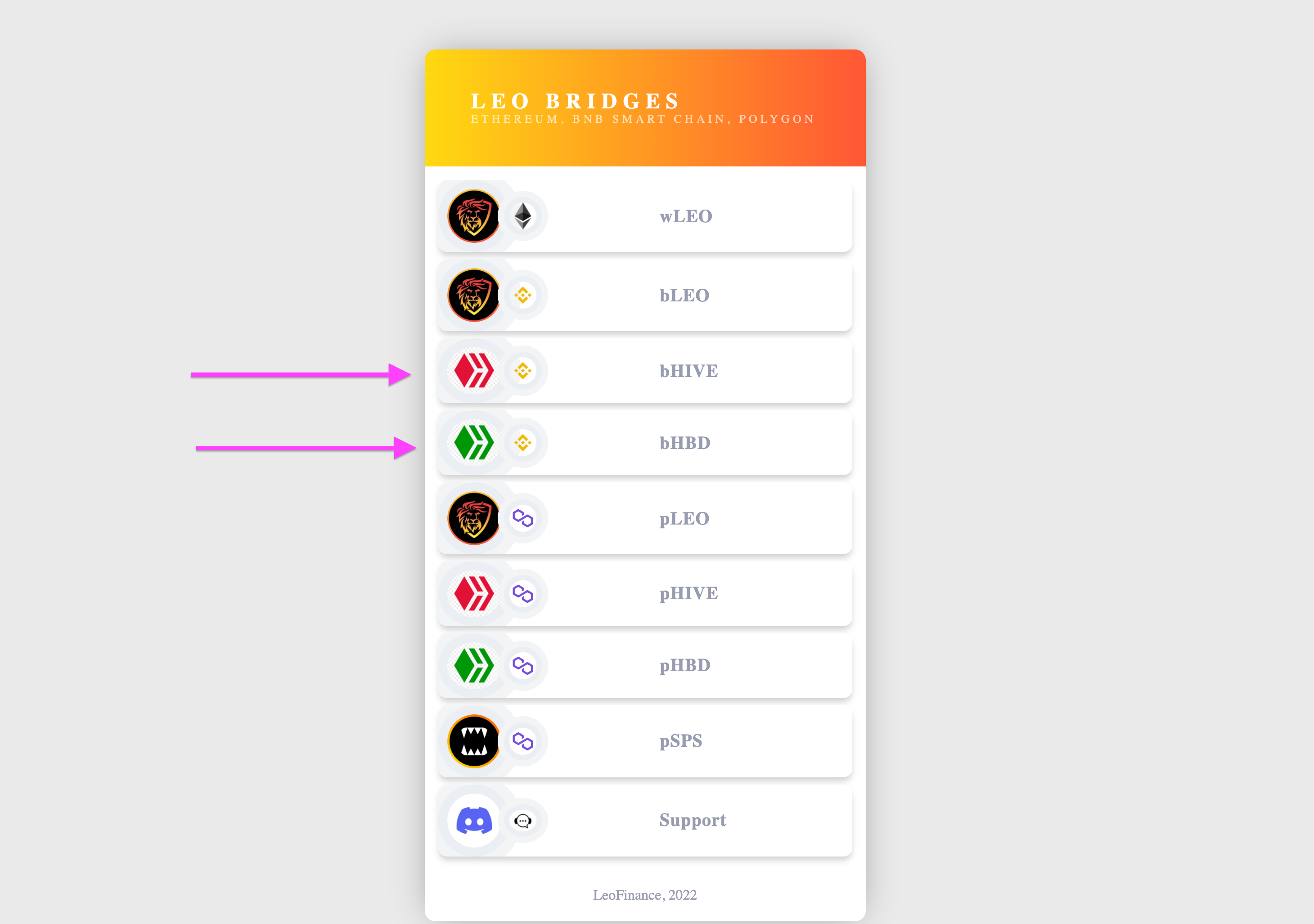 2). Enter the amount to wrap, your receiving address and then click "Transfer" 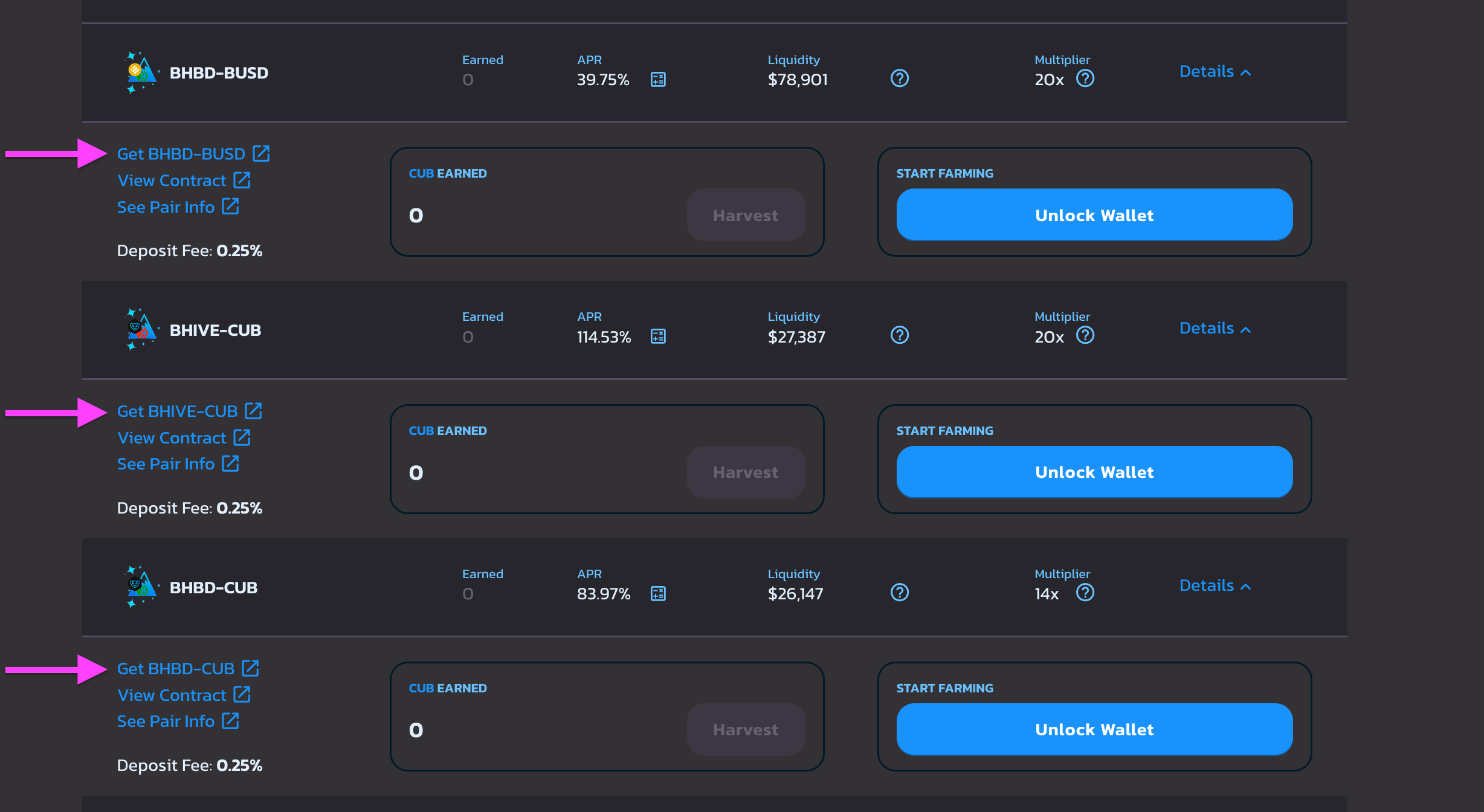 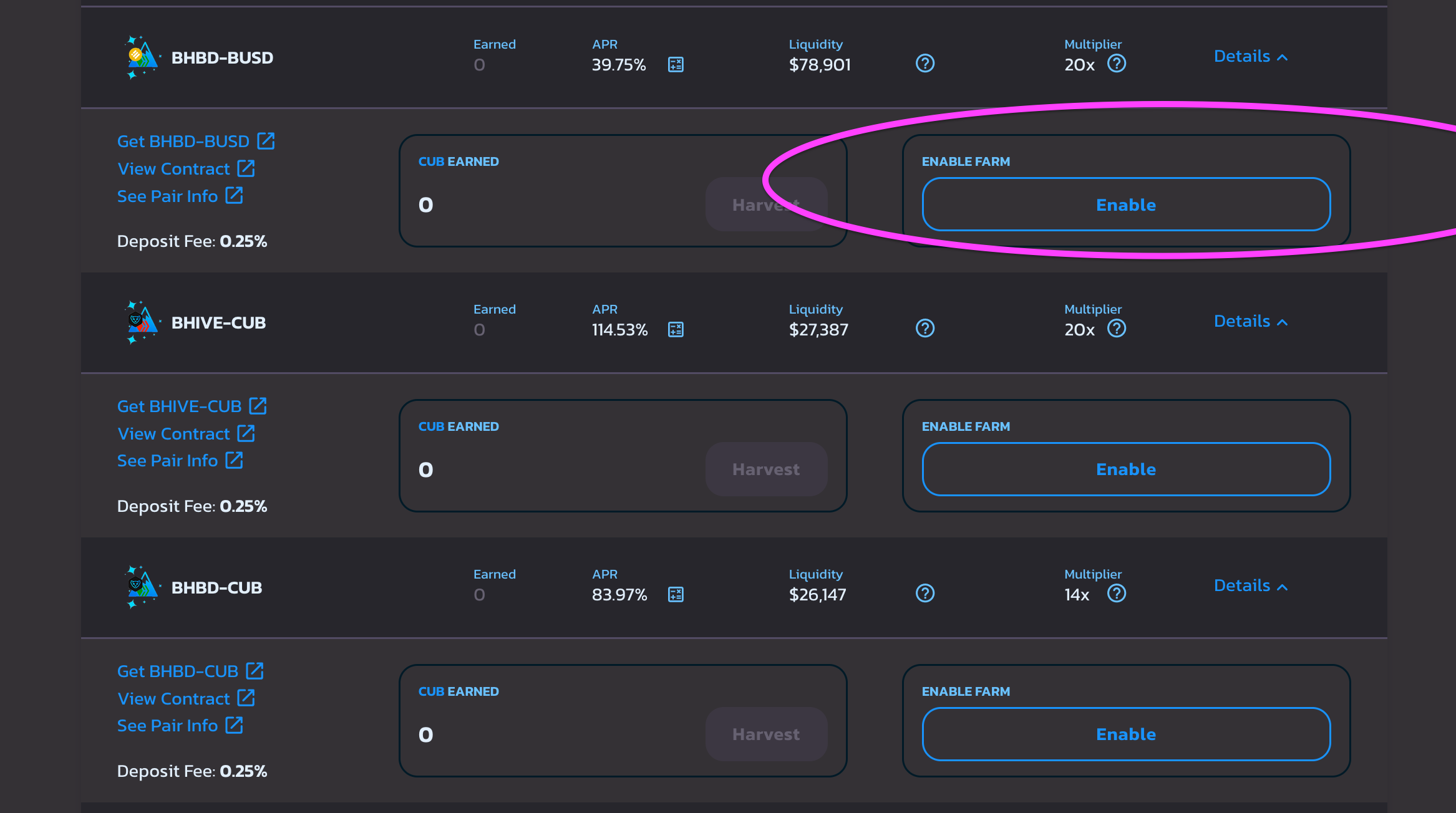 6). Once Enabled, a Deposit Button Will Appear. Deposit your LP tokens to start farming CUB

A few of our awesome community members have already written guides about how to use the new V2 vaults and wrap HIVE and HBD to BNB Smart Chain!

LeoFinance is a blockchain-based Web3 community that builds innovative applications on the Hive, BSC, ETH and Polygon blockchains. Our flagship application: LeoFinance.io allows users and creators to engage and share content on the blockchain while earning cryptocurrency rewards.

Our mission is to put Web3 in the palm of your hands.

Web3 is about more than social media. It encompasses a personal revolution in financial awareness and data ownership. We've merged the two with our Social Apps and our DeFi Apps: Thank you for bring these great innovations to Cubfinance!
Every version is great and timely, as was this one.

Thanks for the new cub vaults. Time to jump in now.
Also Thanks to the hardworking leofinance team for making cub and polycub great. We love you 😎.

Doing our best to overpromise and overdeliver on soons and wens 🦁

And this time it looks like the SOON was spelled only with 2 "o's"! Thanks

This is a very interesting project.
For a newbie who’s not as familiar where would be a good starting place for me? Thank you

The team is just super amazing.

It's indeed a juicy update. We're moving into a very crucial season in Leo DeFi's growth. The next bull run would make CUB investors smiling all the way.

Your content has been voted as a part of Encouragement program. Keep up the good work!

Use Ecency daily to boost your growth on platform!

It will be very interesting to watch the two mechanisms operating side by side.

We have Polycub, with the disinflation design versus Cubfinance's inflationary model. Polycub doesnt burn, instead using all revenues to purchase $POLYCUB on the open market and push it to the stakers.

On Cubfinance, the revenues are used to burn CUB.

Which one will work better in the end? We will see.

Either way I'm putting eggs in both networks!

But yeah you're right it'll be interesting to see which system works out better. Good point

Submit
0.00 HUSTLER
Reply
[-]
poshtoken  21 days ago
The rewards earned on this comment will go directly to the people sharing the post on Twitter as long as they are registered with @poshtoken. Sign up at https://hiveposh.com.
100%
-100%

Will it be possible soon to swap assets between bsc and polygon directly on the site when the new system launches?

It would be really handy to have a mechanism for full cross chains swaps across multiple chains and any new sites that come in the future.

Isn't that what the bridge does in a way?

The sooninverse is already here... Just exciting that it's now.

CUB Finance was long overdue for an overhaul and I am glad to see a new strategy for it through burning mechanics and more value accruing pools. DeFi is hard during the bear market and getting things done during this period, should greatly provide when the market starts to go up. Good news on all dimensions and projects are continuing to grow in Leo Finance ecosystem.

DeFi is still around and stronger than ever. Great to see new changes and advancement in the space. Binance and Hive have one powerful DeFi App.

Nice! Might have to start adding to the stablecoin farms for a bit. But gotta get back to stacking status first, lol. One day, lol.

Well delivered!!! The APR went down quite a bit in these vaults since the AMA. Well done team (I guess it means loee people added liquidity because of it right?) And thanks for working so hard on all this cool stuff.

Thanks for the exciting update!

SO much info in here for #CUB.
I think #Cub will come back stronger.
By burning it will help to leverage the value to move up to double digit.

Hey @leofinance, here is a little bit of BEER from @pouchon for you. Enjoy it!

Do you want to win SOME BEER together with your friends and draw the BEERKING.

Thanks for sharing this tip, it was really nice and helpful

Congratulations @leofinance! You have completed the following achievement on the Hive blockchain and have been rewarded with new badge(s):

This is so amazing and I’m very happy to see this rollout too, don’t stop the good work threads on it way

Thanks for the update,👍👍

I can confirm that I am also hard

Great addition and expansion of the BSC bridged assets