nickyhavey in LeoFinance • 2 years ago 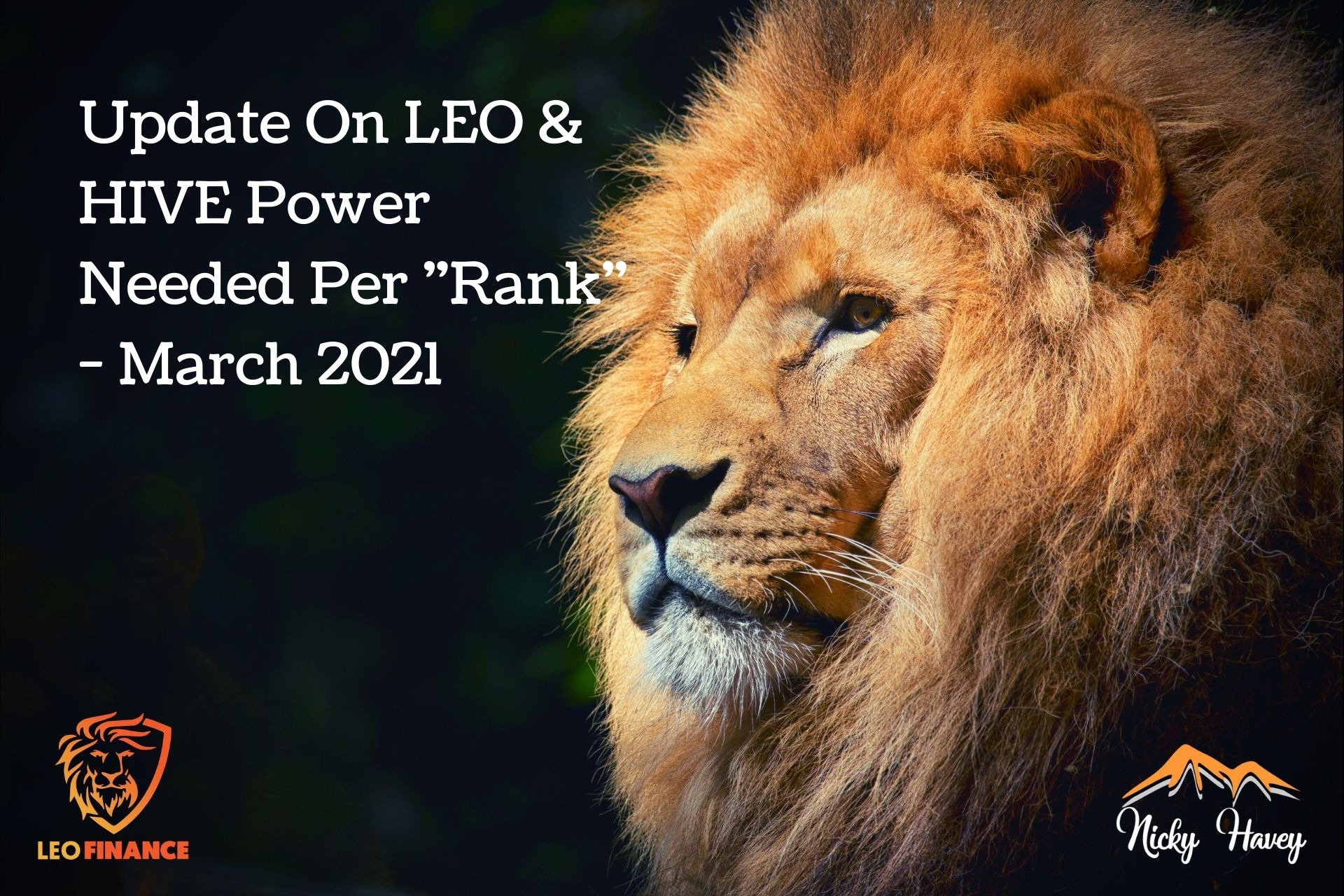 What a crazy month it has been in the world of LeoFinance with the launch of CubFinance causing 99% of posts to be about this on the Leo platform, it's understandable that the community is excited about it! I've watched a few videos featuring Khal and when he appeared on the Crypto Salad series with Taskmaster and RaymondSpeaks, it looks like all the work that's going in with all these project roll-outs is anchored by the LEO token, which started it all off and gives good reason to keep LEO staked.

So, with that in mind, I'm still going ahead with my "Unofficial Ranks" series focusing on LEO power as, due to the inflation of the token, each month, the amount needed to get to the various ranks changes. All of you who have commented on these posts have provided the names over the last few months and it seems the Leo community is pretty well set on the ranks/titles given! You can use these as goals if it helps you have something to aim for with your own journey but bear in mind, these are for fun and entertainment purposes!

We should all have goals and these are really dependent on your own personal situation but for me, I like having a target to aim for as it keeps me motivated and I have that focus - as long as you don't burn out! The best way to prevent burn out is to make goals based around SMART principles:

An example on LEO could be to "reach x amount of Leo Power by y date", making it realistic in the process and adapting if necessary.

The calculations I use can be found in an earlier post here and I've used the "circulating supply" for the tokens after a discussion with @onealfa.leo on my previous update.

The circulating supply at time of calculating was 6,987,000 LEO. If total supply was used, the amount needed would be a little different with 989,840 LP needed for Toruk and you'd divide by 10 to get the rank beneath.

With the snapshot taken a couple of weeks ago for the airdrops we received in CUB (and soon for this Project Blank), I've managed to maintain my Puma level with about 1,600 LP. I've delegated out all my LP to various active curators on LEO as I've been going back to making music again and sharing the good vibes there so I won't be around LEO as much as I was.

HP is a little easier to work out as it tells you on Hive Block Explorer! Scroll down to "Hive per MVests" and it will tell you how much you need to be a minnow. Divide by 10 to get the redfish amount, multiply by 10 to dolphin, 100 for Orca, 1,000 for Whale and that's it!

As HIVE celebrates its first anniversary, there have been many jubilant posts about the developments that have happened since then. It's definitely a totally different feel to how things were over a year ago and so many different projects to get involved with and support with your HP along with various content creators with a stronger upvote!

If there's any other tokens you want me to do a table for, I'd be happy to do it! So far, I have the unofficial rank series for CTP, VIBES, SPORTS, LEO and HIVE!

Where do you sit in these ranks and are you looking to level up even more in 2021? Let me know in the comments below!

On Leo have you looked at how many tokens are being burned right now? Cub is taking out the supply like a mother fucker! Either way I’m almost at 10k so I’m well into lion mode

I've only used the current circulating supply on the Hive-Engine for these calcs. As for CUB, I need to dive in to the numbers a bit more but yeah, that burn rate is immense! Poor CUBs getting incinerated lol!

So for this moment in time, here's a quick spreadsheet: LOL nice one, at least I am an orca in the cub world so I don't feel too bad, keep burning. Once leobridge rolls out its going to be harder to move up the ranks

Lol, nice! I'll be happy if I can squeeze up in to the Orca ranks, just a few more CUBs to harvest then see how things go with the 1 CUB/block rate.

Always informative in sharing your thoughts, how to get from one stage to the next, thanks @nickyhavey good luck with your music and will keep both an /eyeear out on platforms you use.

Thanks a lot Joan! Will keep the popular posts going from the Unofficial Ranks series as I know a few people liked them!

Will still share the musical creations here and on my usual socials! Hope everything is well with you and things are cooling down in the furnace that is South Africa!

Nice tables, and nice to see that I'm a "Minnow Puma" ... Minnow on Hive, and Puma on LEO. I guess I have a long way to go, but ah well, it's a nice journey anyway.

You will get there! Have fun along the way with your journey, that's the main thing!

Well, according to those numbers - I SUCK !!!

LOL, well back to the daily grind ;)

Keep at it, you'll get there!